The Black Mamba (Dendroaspis polylepis) is one of Africa’s most dangerous snakes and feared in East, Central and Southern Africa. It’s aggressive when cornered and will not hesitate to strike. It can reach speeds of up to 12 mph (20 km/ph). It’s the largest venomous snake in Africa with adults reaching an average of 8 feet in length (2.5m). Black Mamba’s are not black at all, but brown/olive skinned. Their mouths are inky black which they show when threatened. Black Mambas live in savanna, scrub, tree hollows, and sometimes people’s homes. If a Black Mamba encounters prey it can strike up to 12 times, each time delivering enough neuro and cardio-toxic venom to kill a dozen men within 1 hour. Without anti-venom, the mortality rate is 100%.

The Puff Adder (Bitis arietans) is considered to be Africa’s deadliest snake because it is responsible for the most human fatalities. Puff Adders reach an average length of around 1 meter, and they’re solidly built with a wide girth. Color patterns vary depending on where they live, their habitats extend throughout Africa except for dense rain forests and deserts. The Puff Adder has large fangs and its venom is powerful enough to kill a grown man with a single bite. Puff Adders rely on camouflage for protection and lie still if approached. Because of this, people tend to step on them and get bitten. Many fatalities occur because bites are not treated correctly, leading to infection and gangrene.

The Boomslang (Dispholidus typus) is an extraordinarily dangerous snake found in sub-Saharan Africa. Human fatalities are rare, since this snake is very timid, but spectacular. It’s venom is haemotoxic, which means that it affects the body’s natural blood clotting mechanism resulting in the bleeding of the internal organs. Sometimes it can take as long as 24 hours before the symptoms of the venom can be felt or seen. Once it gets to work however, a person can bleed to death from every orifice. The Boomslang is a tree-dwelling snake (Boomslang means “tree snake” in Afrikaans). Females are brown, and males are light green with black highlights. The Boomslang reaches an average length of 5 feet. Its fangs are at the back of its head.

The Gaboon Viper (Bitis gabonica) has the longest fangs and the highest venom yield of any venomous snake in the world. Gaboon Vipers can be found in West, Central and parts of East Africa, they prefer forested areas. Adults reach an average length of around 5 feet. While the Gaboon Viper delivers a huge dose of venom, the venom is not as toxic as some of the other snakes on this list. A single bite could kill a man however. Gaboon Vipers are very interesting looking snakes with a huge triangular shaped heads and pretty black, brown and pink markings. Gaboon Vipers are quite passive and rarely bite unless provoked or stepped on (even then they don’t always bite).

The Egyptian Cobra (Naja haje) is a deadly venomous snake most commonly found in Egypt but also in other parts of North Africa. The Egyptian Cobra has glands located behind its eyes which produce a deadly neurotoxic venom that’s released through its large fangs. The venom of an Egyptian Cobra is so deadly it can kill a full grown Indian Elephant in 3 hours. In humans its venom causes paralysis and death due to respiratory failure. The adults average about 2m in length and are usually yellowish to dark brown with brown cross bands. Egyptian Cobras are aggressive snakes that live in dry to moist savanna and semi-desert regions. It is thought that Cleopatra used an Egyptian Cobra to commit suicide.

The Saw-Scaled or Carpet Viper (Echis genus) are small, bad tempered, highly venomous snakes found north of the equator in Africa. Adults vipers reach an average length of just 20-30 inches. Their venom is hemotoxic and very virulent. This means the venom causes spontaneous internal bleeding, sometimes days after the bite has occurred. The Saw-Scaled viper is named for the sound it makes as its scales rub together producing a warning sound similar to a “sizzle”. These venomous vipers are active after dark and that’s when most of their victims are bitten.

The Cape Cobra (Naja nivea) has a powerful venom and is one of the deadliest snakes in Southern Africa. Cape Cobras grow to an average of around 4 feet. Cape Cobras are particularly dangerous because they tend to be nervous and aggressive. Without treatment, the mortality rate in humans is 60% and death normally occurs 2-5 hours after being bitten, usually as a result of respiratory failure due to the onset of paralysis. The Cape Cobra is a beautiful looking snake some are yellow, some copper/mahogany colored and some are purplish/black. The Cape Cobra loves to hunt for rodents and can climb trees to raid weaver bird colonies. The Cape Cobra is common throughout dry regions in Southern Africa.

The Eastern Green Mamba (Dendroaspis angusticeps) is a venomous snake related to the highly dangerous Black Mamba. The Green Mamba is less aggressive and smaller than the Black Mamba, they average around 6 feet. The Green Mamba’s venom is also significantly less toxic, however a single bite could certainly be fatal to a human. Green mambas are highly arboreal and almost never touch the ground. They are generally found in south-eastern Africa. Like their name, Green Mambas are a lovely grass green color, but yellow when born. 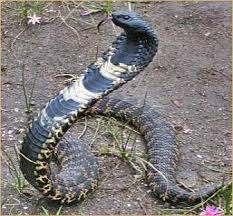 The rinkhals (Hemachatus haemachatus), also called the ringhals or ring-necked spitting cobra, is a venomous elapid species found in parts of southern Africa. It is not a true cobra in that it does not belong to the genus Naja, but instead belongs to the monotypic genusHemachatus. However, it is closely related to the true cobras and is considered to be one of the true spitting cobras.[

One thought on “AFRICA’S VENOMOUS SNAKES”