How did a stray dog end up competing in a six day race across the Amazon with a team of Swedish extreme athletes? Well, it all started with a meatball…
The Adventure Racing World Championship is a 430-mile race that takes place in the Ecuadorian rainforest. Combining hiking, trekking, mountain biking, and kayaking, this competition is certainly not for the faint of heart. Mikael Lindnord and his team, composed of three other extreme athletes, had made it all the way to the final stages of the competition when they were unexpectedly joined by a fifth team member!
Lindnord and the team had stopped for a meal break when a skinny stray dog wandered up. Doing what any animal lover would, Lindnord offered the pup some of his meal and like that made a new friend. After this short pause, the team carried on in their adventure, trudging for hours through mud and steep terrain and the dog followed them the whole time!

“Maybe he felt that he wanted an adventure,” Lindnord told TODAY. “He took a chance and [found] us friendly.”
The team named this pooch, Arthur, after the courageous King, and he came with them through the rest of the race. When the team stopped for a meal, they shared part of the food they had with Arthur. This sort of competition is exhausting for people who have been training for years, but to a dog who is new to this sort of intense exercise, it is even more exhausting. 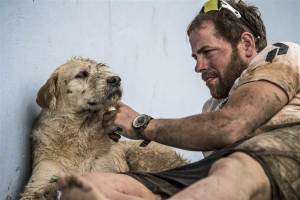 We checked our backpacks for more food and we found these two cans of soft food,” Lindnord tells PRI. “We took one bite each and we just gave the rest to Arthur, because he was really exhausted.”

Arthur completed a 20-mile hike with the team and 36-mile kayaking journey. Race organizers warned Lindnord and his team that taking Arthur in a kayak posed a threat to the safety of all parties involved. Thinking this might be where their paths diverted, the team set out in their kayaks, but Arthur followed and tried to doggy paddle alongside. Seeing his desperation, Lindnord gave in and hoisted Arthur into his boat.

Lindnord tells PRI, “You can’t reject a dog that had put in so much energy into you. It felt like he was one of the team members, and we didn’t want to let him down.”
Lindnord even shared his Gore-Tex jacket with Arthur to help him endure the cold after being soaked in the river. As the race organizers predicting, kayaking with a dog wasn’t the easiest feat. Arthur kept jumping into the river to try and catch fish! But every time he did, Lindnord was there to get him back on the boat. No man … or dog, left behind. 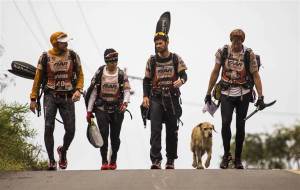 After the team completed the race, they took Arthur for a vet check-up. He had sustained a few injuries during the trek and spent a couple days recovering with the help of the specialized vet team. There was no way that Lindnord could leave such a valiant companion behind and decided he would adopt Arthur and take him back to Sweden.

The team may have come in at 12th place, but they came back with the best prize of all … a new, loving friend. Enjoy resting in your new forever home, Arthur!